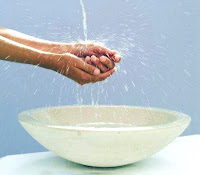 Pilate, an authority figure had a chance to stand up and do what was right. But he chose to follow the crowd; the most popular; the current 'story' on this man Jesus. He knew Jesus was innocent of the crimes he allegedly was charged with. He could not stand up against the crowd. He could not risk his position as a Roman leader. Does this still speak of our leaders of today? I personally know of two judges and a District attorney that has done the same. Politics hasn't changed much in 2000 years. Interesting isn't it? Would YOU be willing to stand up for the Truth against the crowd? Is it really that simple to wash the hands of accountability?

Luke 23:4
4 Pilate turned to the leading priests and to the crowd and said, “I find nothing wrong with this man!”

Matthew 27:24
24 Pilate saw that he wasn’t getting anywhere and that a riot was developing. So he sent for a bowl of water and washed his hands before the crowd, saying, “I am innocent of this man’s blood. The responsibility is yours!”

Luke 23:22-24
22 For the third time he demanded, “Why? What crime has he committed? I have found no reason to sentence him to death. So I will have him flogged, and then I will release him.” 23 But the mob shouted louder and louder, demanding that Jesus be crucified, and their voices prevailed. 24 So Pilate sentenced Jesus to die as they demanded.

Dear Father, I pray for those that have authority of the law. Soften their hearts, give them strength to be responsible and the knowledge to be accountable for the decisions they make. Touch them with your Holy Spirit so that they know they never have to 'wash their hands' to the innocent but to uphold the law so it protects them. I ask forgiveness for the those that have turned their back against doing what is right and justice. Show them they can still make a wrong decision right.
Posted by Sherri at 8:36 PM